Hanging drywall doesn’t have to be as complicated a process as it seems to be. Part of the process is ensuring that we have all of the requisite materials and tools that we need to do the job properly. Having the right drywall screws is one of the most important aspects.

Drywall nails or screws should be at least 1 1/4 inches but no longer than 1 3/8 inches long for 1/2 inch drywall. Nails should be ring shank in nature to improve security and reduce the risk of the screw or nail popping out. This ensures proper stability and placement.

Whenever you work on installing drywall panels that are a half-inch thick, it is imperative that you use either nails or screws that are at least 1 ¼-inch long and a maximum of 1 3/8-inch long. The goal here is that you want the screws or nails to sit securely without being too short to provide proper stability or too long that they poke through.

The good thing about using drywall nails is that they are cheap to procure and easy to install. Moreover, drywall screws are better than nails because you will need fewer drywall screws to secure the drywall than you will nails.

Coarse threaded drywall screws are generally used when you have wood studs. They have wider threads that are good at getting a grip in the wood and then pulling the drywall and the wood studs together. The only downside is that there can be metal burrs that get embedded in your fingers, so wear gloves if you go with coarse.

When looking at the gauge of a thread, it is important to know that the gauge refers to the screw’s diameter. Generally speaking, when it comes to hanging drywall, you will be using #6 or #8 drywall screws. Just know that as the gauge numbers increase, the size of the diameter becomes larger.

The actual size of the #6 gauge is 0.138 inches while a #8 gauge is 0.164 inches. The higher the gauge, the larger the diameter. Gauge size depends on the size of the stud but you should generally be able to get away with either a #6 or #8 gauge.

How Many Screws Would Go Into a 4×8 Sheet of Drywall?

Typically speaking, wall studs will be set between 12 and 16 inches apart in order to fit a 4×8 foot panel of drywall proportionately. This means that in a standard home construction, you would need about 28 screws to attach said 4×8 foot piece of drywall properly.

That’s in the instance of a drywall panel going onto a wall. If it is going into a ceiling, you need to add 8 more screws for a total count of 36 screws. It is imperative that you use the proper amount of screws; too few and it won’t be secure. Too many and you may miss the stud and puncture the wall for no reason.

There are probably a few other things related to drywall that you may hear about and it is important to know what they are and what their purpose is. Hanging drywall is not something that you can just pick up randomly and expect for it to go well.

Bugle Head. This is in reference to that cone-like shape that the screw’s head may have. This shape is meant to help the screw stay in place without having to tear all the way through the drywall’s outer paper layer.

Screws-per-pound. Generally speaking, some of the larger boxes of drywall screws will be measured not by quantity, but by weight. So, you may find that a box of 1 5/8-inch coarse thread #6 screws will come out to about 200 screw per pound instead of a straightforward quantity of screws.

Drill Bits to Use. For most of the drywall screws, the general rule is that you can use a #2 Phillips head drill-driver bit. There has been a change in some construction screws since they have begun using square, torx, and other heads but drywall has remained the same.

Coatings:  When you buy black drywall screws, this is because they have a specific phosphate coating that is meant to resist corrosion over time. There are others that have a thin vinyl coating that actually has improved resistance to corrosion. The latter are particularly easier to draw in since they have slippery shanks.

Why Do Drywall Screws Pop?

From time to time, drywall nails or screws can pop free. Why does this happen? Well, the most common cause for a nail or screw popping out of the wall is due to lumber shrinkage behind the drywall. If the lumber that you choose during construction has a higher moisture content to it, it can contract and cause the screws to pop out.

Be aware of these factors before hanging your drywall screws or go with a bugle head drywall screw that is less prone to popping out of the drywall. When screws and nails pop out of your drywall setup, it can compromise the integrity of the installation and require that you reapply a fastener. While this isn’t a big deal, it can save you time in the long run.

While we briefly covered screws in the sections above, determining #6 and #8 drywall screws to be the most common, you should know which one to use for your specific instance. If you’re working in a smaller space or materials that are lighter or thinner, #6 should work fine.

It is when you move on to dense, heavy materials or larger jobs that you would want to implement the thicker #8 gauge drywall screws. Using the wrong gauge for the job can also result in the popping of the screws, which will then need to be replaced.

Is It Better to Screw or Nail Drywall?

When it comes to installing drywall, you really can’t go wrong with either option. Screws can provide a bit more security and are generally easier to use with a drill than having to hammer them in but cost more overall.

Nails, meanwhile, are about as secure as screws and cost a lot less. Of course, there is the chance that you could miss and whack your hand but that is the hazard of using a hammer. If you have a building code that requires you to double up on nails, it might be worth it to go with screws instead for simplicity sake. 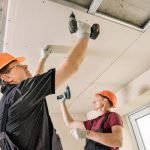 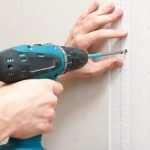 What are Wafer Head Screws?

Sign up to receive latest news, updates, promotions, and special offers delivered directly to your inbox.
No, thanks